Elected by the voting age population, the State Parliament is the highest body for the formation of the people’s political will. The State Parliament of Schleswig-Holstein elects the Minister President. It is the legislative body and controls the executive power. It deals with affairs of public interest.

The 20th State Parliament has a total of 69 legislators who have been elected for a period of five years: the CDU has 34 seats, THE GREENS 14, the SPD 12, the FDP 5 and the South Schleswig Voters’ Association SSW 4. Nowadays, the voting age is 16 years. The duties of the Parliament of Schleswig-Holstein are laid down in Article 16 of the Constitution of Schleswig-Holstein, which has been in effect since 2 December 2014.

Voters in Schleswig-Holstein were able to cast two votes — which are called first and second vote — for the first time in the 2000 election to the state parliament. The first vote is cast for a constituency candidate (direct mandate), whereas the second vote is cast for a party’s statewide list of candidates. In principle, there are supposed to be 69 Members of Parliament, but there may be more because of excess and balance seats. Excess seats, also called overhang seats, are allocated if a party has won more mandates directly by first vote than the number of second votes would normally permit. In such cases, the other parties receive additional balance seats as compensation to ensure that the balance of power between the parties based on the number of second votes is re-established (principle of equality of franchise). The State’s Election Law governs how these balance seats are actually allocated.

On June 29, 2022, three weeks after the parliament’s constituent sitting, Minister President Daniel Günther (CDU) was elected to the highest government office by secret ballot without debate. He was voted into office on the first ballot. The other Members of the Cabinet were then appointed by the Minister President and sworn in by the President of the Schleswig-Holstein State Parliament on the very same day. The CDU and THE GREENS have joined forces, so the state government is formed by a two-party coalition. The CDU has taken on five ministries, while the THE GREENS are in charge of three ministries. In principle, it is possible that the Minister President and the State Ministers are also elected Members of Parliament, meaning that they may occupy two seats in the plenary chamber – one on the government bench and one among the legislators of their respective parliamentary group. 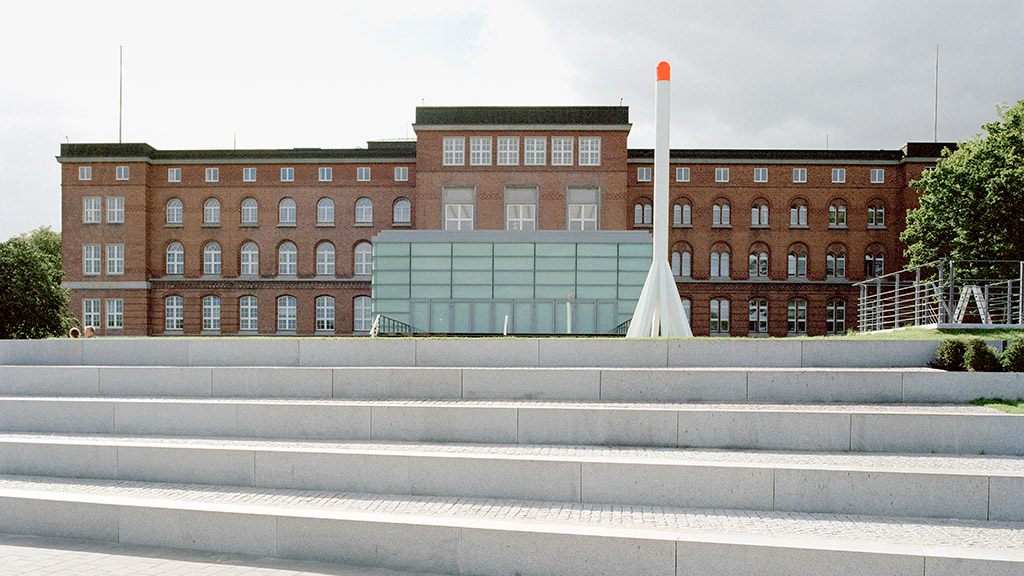 In addition to its lawmaking and budgetary approval powers, the State Parliament has another important responsibility: It exercises oversight over “executive power”, i.e. the Government of Schleswig-Holstein. The State Parliament and its committees are entitled to demand the attendance of members of the Government of Schleswig-Holstein. By the same token, members of the government or their representatives are authorized to attend plenary sessions and parliamentary committee meetings. The State Government is obliged to brief the State Parliament fully and at an early stage about draft bills as well as about key questions of land use planning, location planning and the realization of large-scale projects. Moreover, it must keep Parliament informed about the preparation of ordinances and administrative regulations, its participation in the Upper House of the German Parliament, the Bundesrat, and its cooperation with the other federal states, the Federation as such, the European Union and other countries. Furthermore, the Government of Schleswig-Holstein has to provide information to the MPs. This can be done by means of written questions or by requesting that the government answer queries in so-called question time in the plenary sessions of the State Parliament or also through a parliamentary procedure known as interpellation by which the government is asked to explain complex policy issues in great detail. An entire parliamentary group or at least 18 MPs must support the request for a major interpellation, whereas an individual MP can submit questions in writing or ask questions during question time.

The Parliament of Schleswig-Holstein moved into the House on Kiel Fjord in 1950. Since then, it has been called “Landeshaus”, the German expression for state house. It was originally built to house the Imperial Naval Academy. After a construction period of five years, the Naval Academy was formally inaugurated on October 6, 1888. Kiel became the Imperial War Port when the German Reich was founded (1871). Measuring 100 meters in length, 50 meters in width and 24 meters in height, the Naval Academy was one of the biggest and most magnificent buildings in town. Pursuant to the Treaty of Versailles, the Naval Academy had to be closed again in 1919 and the Baltic Sea Naval Base moved into the building. The air raids in World War II caused such substantial damage to the building that reconstruction after the war took several years. On 3 May 1950, the State Parliament of Schleswig-Holstein convened for the first time in the former Naval Academy and State House became the permanent home and working place of the State Parliament, even though the legislators initially had to share the offices for many years with the Ministry of the Interior and the Land Chancellery (later called State Chancellery). The legislators and the administration of the State Parliament finally had more space available when the Ministry of the Interior moved out in 1983. The first stage of a thorough rehabilitation and modernization project was carried out from 1984 to 1987. Since then, it has been possible to follow the plenary debates in the State Parliament via loudspeaker in the offices as well as in the conference and meeting rooms. In addition to the “paternoster” that has been in operation since 1950, an elevator accessible for people with disabilities was installed. The second construction phase began in 1999. The main project was to build a new plenary chamber facing the waterfront on the site of the former terraces of the State House. The design of the annex made of glass symbolizes democracy and transparency. The first sitting in the new Plenary Chamber was held in April 2003. There are more than 70 seats available to visitors on the gallery. In addition to the plenary sessions, many public events are also organized here, for example readings, exhibition openings and public discussions. Since the end of 2006, the State House has been used exclusively by Parliament because the State Chancellery and the Minister President have moved to another building on Düsternbrooker Weg. 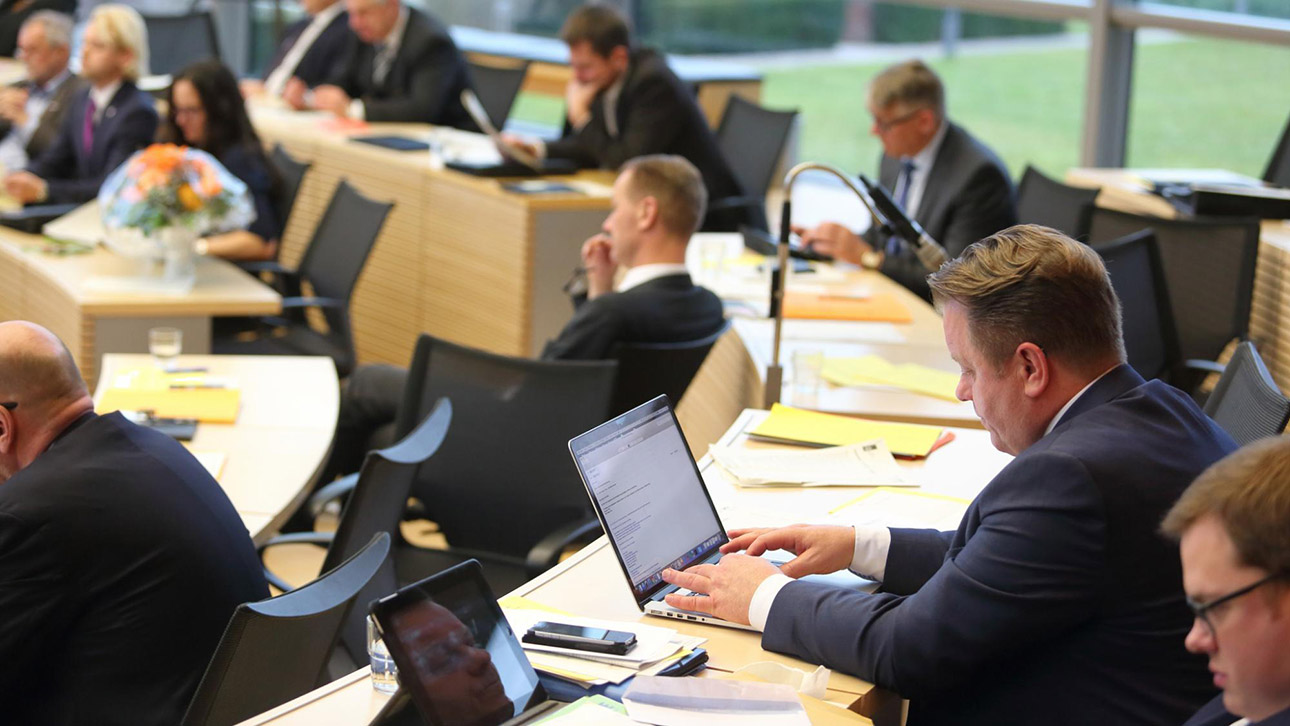 In principle, the Plenary will consider draft bills and budgetary proposals, but also agreements going beyond the competence of Schleswig-Holstein (e.g. the amount of the radio license fee) in two readings. The purpose of the first reading is to discuss the general principles of a piece of legislation, whereas the second reading is primarily devoted to the consideration of specific details. In between the two readings, there is the deliberative process in the committees. Draft bills can be introduced by individual Members of Parliament, a group of legislators, the Government of Schleswig-Holstein or by public initiative. A final decision will then be taken either by the Plenary or in a referendum.

The individual federal states have the right to enact legislation in all cases in which the Basic Law of the Federal Republic of Germany does not vest legislative power in the federal level.

Within the scope of its legislative powers, the decision on the State’s budget is an important task of Parliament. The government draws up and submits a budget showing revenues and expenditures for the coming year (or in the case of a biennial budget for two years) to the State Parliament. Just like any piece of legislation, this draft budget is deliberated in first reading, in the committees, and in second reading before the Members of Parliament actually vote on the budget involving billions of Euros. 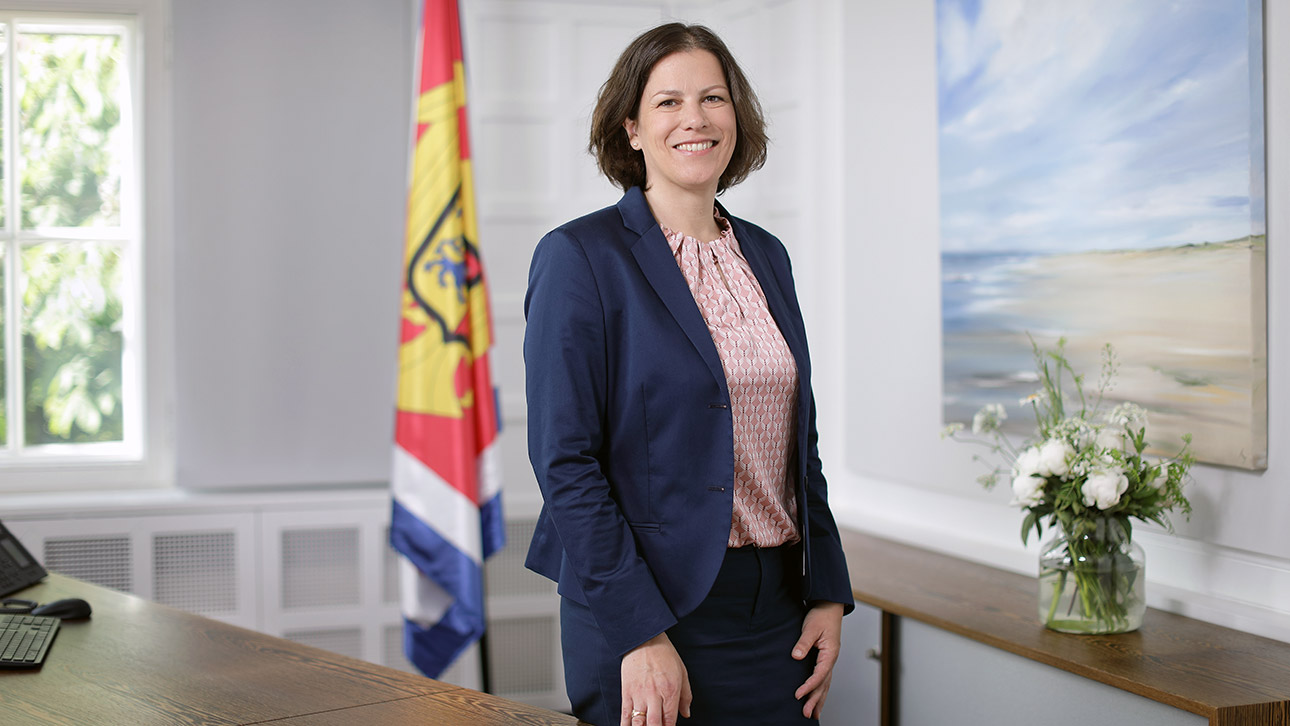 Article 17 of the Constitution of Schleswig-Holstein states that “Members of Parliament represent the entire people. In discharging their duties they shall be governed only by their conscience and shall not be subject to any orders and directives.” This article also specifies the constitutional rights that legislators are endowed with, namely the right to

The Act on the Legal Status of Members of the Schleswig-Holstein State Parliament contains precise details on the legal status that MPs have. Among other things, it prohibits any dismissal from employment with or without notice on the grounds of the acceptance or exercise of a parliamentary mandate. This protection against dismissal begins when a candidate runs for State Parliament and continues up to one year after the MP has left office.

Reconciling one’s work as an MP with the last job one has held can be quite difficult. Moreover, the regulations regarding the incompatibility between political mandate and profession may apply in some cases: While holding office, Members of Parliament may not work as civil servants or employees of a Supreme Land Authority nor may they head any State Agency or Authority, such as a school, a police station or a police department directly subordinated to the Ministry of the Interior.

Other positions that Members of Parliament are barred from holding during their term of office are professional judge and public prosecutor at the Land level. They are not allowed to work as salaried board members of public corporations or public-law institutions that are accountable to the State of Schleswig-Holstein nor are they permitted to serve in other full-time, salaried, elected public positions, such as District Administrator or Mayor. Soldiers elected to the State Parliament may not simultaneously pursue their professional career.

The following parliamentary bodies are important for the work of every Member of Parliament:

The Plenary consists of the entirety of all the Members of the State Parliament of Schleswig-Holstein. As a rule, plenary sessions are conducted three days a month, ten times per year in the plenary chamber of the State Parliament. The Plenary is the central place for public debate and binding decisions made by the Parliament. Before a political position is presented publicly in this arena, however, it goes through various stages of parliamentary work: the working groups of the parties represented in parliament, the parliamentary groups themselves and the committees. Preliminary decisions for the debates and subsequent votes in Plenary are thus made in these bodies. The debates in the plenary sessions of Parliament are, therefore, not primarily designed to convince MPs from other parliamentary groups. Rather, discussions in the Plenary aim to clarify political alternatives for the public and the media. For this reason, the Plenary is also called “Parliament’s shop window” to the public.

Committees are the parliamentary bodies that concern themselves with different subject areas. They convene for meetings as required by the tasks assigned to them by the Plenary. In contrast to plenary sessions, which are always held in Kiel, the committees travel to other locations from time to time to gather relevant information “in the field”. IIn its 19th legislative period, the Parliament of Schleswig-Holstein has nine standing committees with 11 members each, which reflects the majority situation: the CDU (five seats) and THE GREENS (two seats) can use their majority also in the committees to prevail push through their decisions against the opposition. The other seats in the committees are held by the SPD (two), the FDP and the SSW (one each). The Petitions Committee is an exception in this context as well because it has 13 members.

In addition to its regular standing committees, the Parliament of Schleswig-Holstein can also appoint select committees to deal with special tasks. Moreover, Parliament has the option to establish a commission of inquiry to prepare a decision on a particularly important topic area. Such a commission can be composed of legislators and individuals who are not Members of Parliament, e. g. external specialists. To get to the bottom of a matter of public interest, the State Parliament is also entitled to set up a committee of investigation (if one fifth of its members so desire).